U-Hauls for the Creative Class – Slate

U-Hauls for the Creative Class – Slate 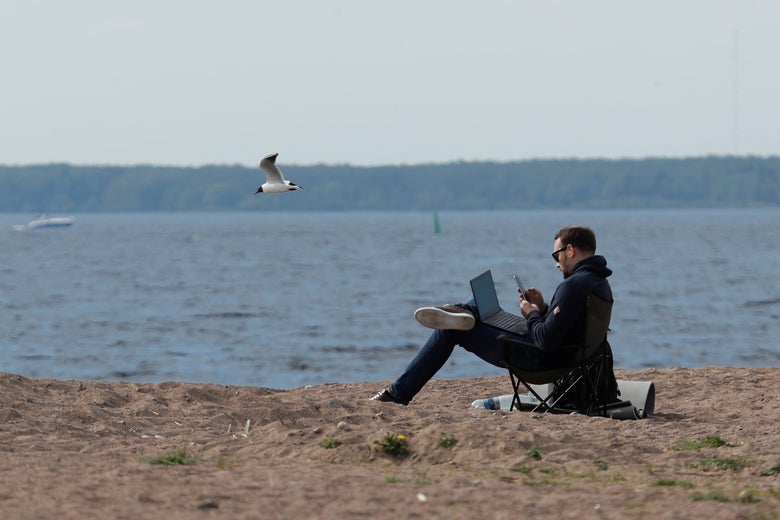 Before COVID-19, the conventional wisdom was that regional economic development required creating, attracting, and retaining big companies. Politicians promised tax breaks and public land and overrode worker-friendly policies like higher minimum wages and mandatory paid sick leave. In practice, this translated into such spectacles as the Kansas-Missouri Border War of Subsidies (in which the two states poached companies across the Missouri River), Scott Walker’s Foxconn debacle in Wisconsin (which promised 13,000 jobs and resulted in a few hundred), and dozens of stadium boondoggles (in which taxpayers bought stadiums for billionaire franchise owners). Mostly, this approach was so much business-as-usual that it went unexamined.

That was the system we’d come to know since the middle of the 20th century, when a number of factors combined to make offices, manufacturing facilities, and even sports teams newly mobile, ready to hop between jurisdictions—or threaten to. For governments, the race to the bottom was on.

Then, in recent years, a countervailing force emerged: Big offices gravitated toward high-cost cities, lured by deep labor markets and the lifestyle preferences of senior executives. Their presence has funded progressive local achievements such as free universal pre-kindergarten—and clustered the most highly paid Americans in a handful of very expensive places.

The tension between these two trends was on full display in the contest for Amazon’s HQ2. Virtually every large U.S. city offered a package of incentives. In the end, Amazon chose two of the most expensive, progressive metro areas in the country, D.C. and New York City. Amazon CEO Jeff Bezos had a home in each of them. In New York, local left-wing politicians scuttled the subsidy deal. And then Amazon leased a bunch of office space there anyway.

The pandemic threatens to throw both models out the window. For almost a full year, remote work has been reality for most of the country’s highly educated and highly paid workers. If the workers don’t have to follow the company, then why should cities fight for it? And if the company doesn’t need geographic access to great workers, why set up shop in a big city?

Those questions suggest we’re on the cusp of a new model for urban economic development—one in which politicians can blow past the chamber of commerce and go straight after future residents. Cities like Tulsa, Oklahoma, and states like Vermont were early on the trend, offering direct subsidies to relocating workers before the pandemic arrived. Boosterish articles in recent months have focused on the supposedly sudden appeal to techies of places like Austin, Texas, and Miami.

A civic reorientation toward people was the thesis of The Rise of the Creative Class, Richard Florida’s 2002 book that argued that cities must focus on attracting creative workers to succeed. He thought that meant investing in the arts, reviving downtowns, and supporting diversity. Now that office workers can do their jobs from anywhere, the creative-class model might seem more promising than ever.

But what if, left to their own electronic devices, those workers will just as soon head to low-tax, low-cost, sprawling exurbs in the Sun Belt? Are we in for a second round of the race to the bottom, as hypermobile workers ditch the post-pandemic rebuilding process in big cities? What should a city or state do to tie down or attract rootless households?

The fear of a professional-managerial class fleeing high taxes has haunted blue-state politics.

Both of these scenarios echo the old ways—of marketing cities either with incentives, like low taxes and cheap housing, or amenities, whether it’s networking opportunities or great public schools. The difference is that politicians can cut out the middleman and make their case straight to the people.

Last week, I wrote about the elite cohort of Silicon Valley executives loudly declaring Miami the post-COVID destination of choice. When I asked Richard Florida about this, he was skeptical. Miami, he reckoned, was part of a select geography of destinations—beach towns, ski towns—that have gotten a lot of attention during the pandemic because they make compelling destinations for the rich. In the long term, he thought, amenities like great schools and big job markets would prove greater attractions than low taxes and warm water.

The economist Noah Smith agrees that digital nomads like himself are unlikely to escape the gravitational pull of so-called superstar cities. Workers who haven’t reached private-island status will be well served by nearby social networks that include their peers, friends, and family. Singles will want big dating pools, and two-earner households will find it doubly hard to give up on the big-city job market unless everything goes remote forever. Some middle-income households may even relish blue-state perks such as good public transit and vigorous public university systems.

Still, the fear of a professional-managerial class fleeing high taxes has haunted blue-state politics. This is in part because stories about the wealthiest Americans’ choices tend to dominate the media’s perception of what’s happening (mea culpa)—and because those high-profile movers tend to be unrepresentative, independent operators who don’t go to the office every day anyway (golfers, actors, founders). New York Knicks owner James Dolan is putting $4 million into the New York City mayoral race to push the candidates of his liking, with a warning that his wealthy friends are moving to Texas and Florida.

That civic fear also persists because those same wealthy people have the ear of powerful politicians, as New York Gov. Andrew Cuomo memorably demonstrated this summer when he argued against higher taxes by citing the conversations he had all day with people who had retreated from the city to their summer houses in the Hamptons. (Cuomo has since come around to raising taxes on the state’s highest earners.)

It will take some time for us to have a full sense of how COVID-19-induced migration has played out. The latest census estimates do indeed indicate large outflows from New York and Illinois and into Florida and Texas. But those came last summer, before the pandemic had taken its nationwide toll (and continue a pattern). Most companies haven’t finalized their post-pandemic policies, which keeps many employees within striking distance … for now. Perhaps more importantly, while regular, life-cycle out-migration from cities continues apace, in-migration by new students, new hires, and immigrants has been deferred.

If workers were unchained from the desk, would they fly to lower taxes? In the 1950s, as suburbs sapped the middle class from cities, the political scientist Charles Tiebout suggested that the fight between jurisdictions for new movers would end in an equilibrium when residents were sorted into communities that offered their preferred blends of taxation and service. Tiebout’s model, however, ignored the substantial barriers that high-opportunity suburbs erected to entry. Not everyone could vote with their feet.

Today, there is some evidence that wealthy or high-income households may move in response to financial incentives, but there are many counterexamples. In 2019, if you adjusted salaries to account for the cost of living, the big cities where firms offered the best salaries were Birmingham, Memphis, Cincinnati, Louisville, Indianapolis, Sacramento, Columbus, Oklahoma City, Milwaukee, and Detroit. Not, in other words, the places you hear about everybody moving to. Because for the most part they aren’t.

Where were adjusted salaries lowest, among the biggest metro areas? Miami.

In 2008, the writer Bill Bishop theorized that Americans didn’t move in response to perfectly calibrated economic calculations but to live alongside people like them, in “pockets of like-minded citizens,” a phenomenon he called “The Big Sort.” This certainly seems to be the governing principle in the 11,000-member Facebook group I joined, where New Yorkers seek counsel on leaving the city. No one asks about low taxes. What they want, above all, in leaving the pandemic-stricken megapolis, is suggestions for places a lot like New York. Many of them wind up a few miles away in suburbs like Maplewood or Hastings-on-Hudson.

Before the pandemic struck, Americans had basically forgotten how to move. Barely more than one in 10 Americans changed residences in 2017, the lowest rate on record, and 80 percent of those moves were in-state or local. At the time, some economists believed this stuck-in-the-mud attitude was a serious problem, because workers weren’t willing or able to move to regions with high wages and job growth. The most dramatic declines in moving are for Americans in their 20s, who once moved the most.

There’s evidence that a fair number of people moved during the pandemic—young adults who left college and moved in with their parents, white-collar workers who headed to vacation homes, families with kids headed to the suburbs. But permanent moves to new cities entirely?

Americans were already less mobile than ever. They were reluctant to move for work. Would they pick up and move without it? A shock like the pandemic has the power to accelerate or accentuate trends already underway—such as the movement of well-off, young professionals to Austin, superrich early retirees to South Florida, or young families to the suburbs. But empty out the Bay Area? More likely that the adjustment to remote work’s liberties takes place closer to home—but further from the center of town. The CEO may be moving to Miami, but this time, the office doesn’t have to follow.

Executive Order on the President’s Council of Advisors on Science and Technology – The White House
Germany: New Right to Work From Home During the Pandemic(?) – JD Supra