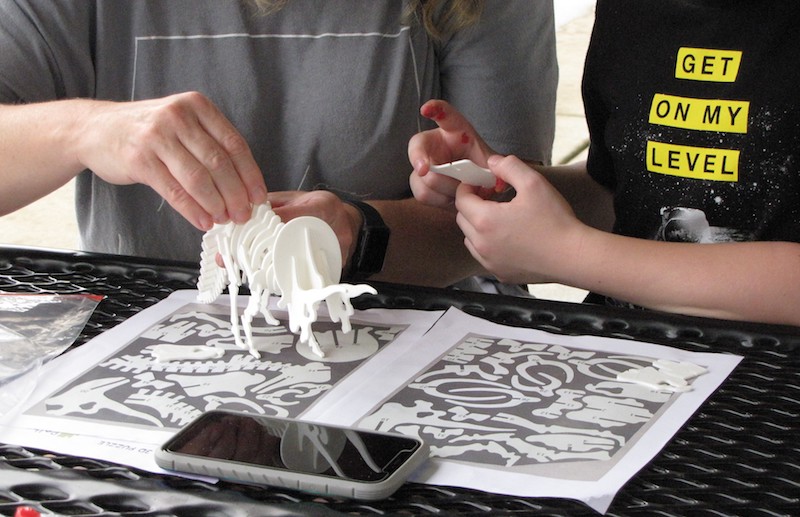 PELHAM – As part of their summer reading program, the Pelham Public Library is offering an opportunity for kids in third through sixth grades to learn more about technology, art and math with their weekly Tech Time program.

The program is led in part by Senior Technology Librarian Matt Griffin, who said that it was a fun way to get kids out of the house and learning.

“We do this program each year as part of our summer reading program,” Griffin said. “It is a way of exposing our kids to more technology, art and math in a fun way. The more the kids get to play and have fun, the easier it is for them to learn about a subject.”

Griffin said that this year’s programming centered more heavily around art. Children in the program are getting to learn about some unconventional ways to draw and build.

“We have been building and controlling robots to make art,” he said. “We have the kids learning about the concept of action art.”

The classes are being held each Thursday throughout the summer at the library. The first program kicked off on June 10, and there are currently programs scheduled through July 15.

The kids who attended the first class found it to be really enjoyable, according to Griffin. He said that they were having a great time getting to learn about the robots and playing with paint and puzzles.

“They are really rolling with it. We had some kids squealing as they controlled the paint splattering it around the tray, while wwe have other students building puzzles that we printed with our 3-D printer,” Griffin explained.

Future events include more action art with robots on June 17, rockets with drinking straws on June 24, a catapult on July 1, water rockets on July 8 and the last program will include a bridge building competition with popsicle sticks.

Those interested in registering their children should call the library at 205-620-6465 on the Monday before each class to register as space is limited.

Clearview AI is closer to…

Clearview AI on track to…

How much unused technology do…

How technology can help seniors…

How Technology Can Support Healthy…

Focus on single technology could…

How Will the Infrastructure Bill…