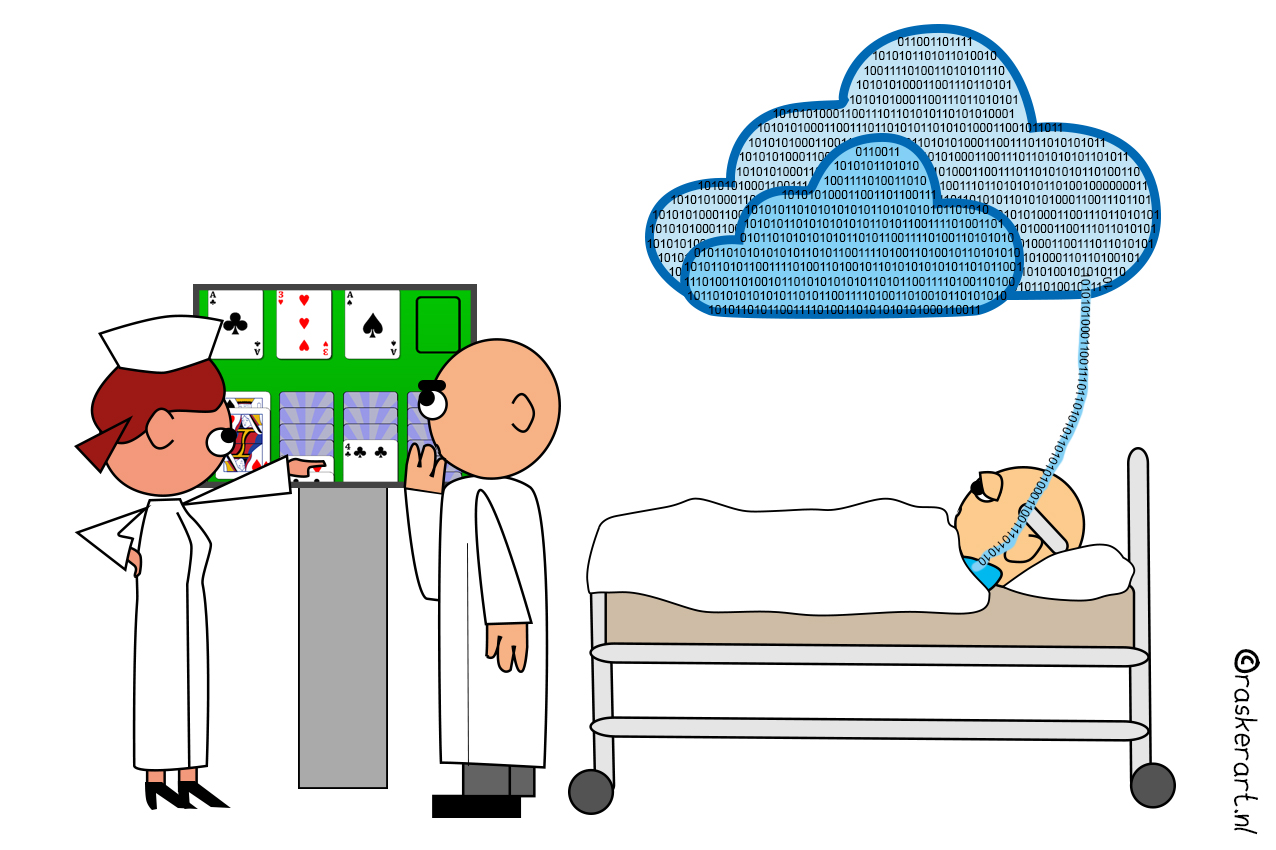 Tech expert Jarno Duursma sees both advantages and disadvantages when it comes to using AI in healthcare. First the advantages: Scientists at Life Lines, a large-scale study into the onset of chronic diseases among 165 thousand people in the northern Netherlands, make use of artificially intelligent software. Duursma: “This research has been going on since 2006. A huge database is being compiled from all those studies and questionnaires. With the help of AI, doctors are able to identify connections that they would otherwise never have spotted, like improving the diagnosis of depression or the prediction of cancer.”

Or what about research into medicines? At Leiden University in the Netherlands, researchers are working on a model that is based on 3.8 million measurements that have been published on drug candidates since the 1970s. This acts as a kind of library that helps scientists search in the right direction. The system also predicts interactions between a chemical and a protein based on 5.5 billion data points. Using the software’s predictions, a chemist can get to work testing whether the potential drug will work in actual practice. In this regard, the use of artificial intelligence saves a lot of time and money. “These are very fine applications that allow you to develop a drug that works faster or to use an existing drug for other diseases. These are great developments that get me fired up,” Duursma adds.

Something else that gets Duursma enthused: Avatars in healthcare. For example, in the form of a digital doctor who conducts a simple intake or summarizes complicated and lengthy pieces of text in a short video for patients. ” By letting artificial intelligence carry out an intake, a doctor has more time to spare. You can also use this digital doctor to explain patient leaflets using a video, which sometimes works better than long texts.”

Want to be inspired 365 days per year? Here’s the opportunity. We offer you one “origin of innovation” a day in a compact Telegram message. Seven days a week, delivered around 8 p.m. CET. Straight from our newsroom. Subscribe here, it’s free!

Despite his enthusiasm, Duursma also warns against using AI in healthcare. “Our healthcare is becoming more and more expensive and is putting more pressure on society. We need to do something about this, but we shouldn’t be focusing solely on technology. We still need to keep a critical eye on the dangers of AI.”

In his view, we tend to overestimate the merits of software. To illustrate this point, he points to an algorithm that predicts whether a mole is malignant or not. “The software was perfectly capable of picking out bad birthmarks, but what transpired when the scientists started probing into how it did that? The system did not reach its conclusions by looking at the moles themselves, but saw the ruler that dermatologists use to track the growth of suspicious moles as an important signal. This shows that an algorithm trained with different pictures of birthmarks comes up with an assessment based on something completely different than what you might expect.”

Duursma sees the same thing in a host of initiatives that were designed to detect Covid-19 on lung photos with the use of AI. “These lung photos are all different qualities and there are a lot of nuances in them. So, in any event, the data is very messy. A specific AI system once again drew a conclusion on the basis of something weird. The algorithm based its diagnosis on a font on the x-ray images of certain hospitals where there were a lot of corona patients. This black box is one danger that AI poses that we need to be aware of.”

Not every problem can be captured in data

According to Duursma, another disadvantage of using artificial intelligence is that we want to capture all problems as data. “By this datafication of the problem, you might be needlessly diminishing the problem. This creates a techno-solutionism, whereby you only focus on where data can be collected. Whereas when you zoom out, not everything can be captured as data. These problems are then excluded from it.”

Nor should we be blind, Duursma believes, to any unintended long-term consequences that technology or artificial intelligence may cause. As an example, he cites the selfie cameras in iPhones: “The selfie camera has contributed to making the individual even more of a focal point. Young people now visit a plastic surgeon with their favorite Snapchat filter: ‘This is how I want to look.’ That’s an unintended consequence of this technology, but no Apple developer had ever considered that before.”

Duursma goes on to say that we need to pay more attention to the talents and qualities that we lose ‘along the way’ as a result of technology, especially in healthcare. “I used to be very good at remembering phone numbers. Now my phone does that for me. The same goes for navigating or doing math in your head. These are skills that we are losing through the use of technology. Especially in healthcare, it is important that we treat this very carefully. Look at this from the perspective of a moral compass. Imagine that we will soon have an infallible algorithm for checking moles. Are radiologists then allowed to unlearn this skill? Or do we teach students not to look at photos because the software does that? I don’t have answers to these questions, but we should continue to critically examine this aspect.”

Tech philosopher at Fontys University of Applied Sciences, Rens van der Vorst, also offers much the same critical examples when talking about AI in healthcare. ” Generally speaking, you see that the diagnostic results of algorithms are quite disappointing. Following the outbreak of corona, all sorts of claims were made. For example, about an algorithm that could predict whether someone had corona based on the sound of someone’s cough. All those initiatives turned out not to be so successful after all. We tend to overestimate the impact of technology in the short term but underestimate it in the long term. Maybe the same kind of thing is happening with AI.”

Van der Vorst sees mainly advantages to the use of AI in logistics operations in hospitals. “Technology often serves as an amplifier. So if you start using AI to help a supermarket operate more efficiently, a supermarket will operate more efficiently. The same is true for a hospital. We’ve seen that software is not yet good enough at making diagnoses, but artificial intelligence is capable of planning more efficiently. AI can also play a role in preventive care right now. With measurements taken in the home and advice on healthy living, to name a few things.”

Steam Bans Games With NFTs and Cryptocurrency – PVP Live
Looking for a Remote Job? These 30 Companies Are Looking for Remote Employees – The Motley Fool